The sorority girls in my fashion course are incredibly articulate when discussing the paradox of fashion as an individuating –but standardizing— cultural formation. (Something I discuss in Uniform vs. Detail.) From them I learned that during rush, the houses ask the women “auditioning” (I actually have no idea what the actual word for this is) to wear a kind of uniform of tee-shirts and jeans and give them all the same bags to carry their things — because their own handbags are ruled too distinctive, too much of an indicator of economic status, in an effort to “be fair.”

This brings up all sorts of questions about what, exactly, can be measured about a person by the bag she carries. And of course, they noted, girls still make an effort to demonstrate their cultural (and economic) capital in other ways — their accessories, their shoes– in order to better differentiate themselves from the other girls. Still, I find the effort to try to receive each girl as an individual because she is in a uniform a great example of the ongoing struggle between particularity and abstraction, individuation and standardization, that defines liberal humanism but also modern capitalism — and how both these regimes underwrite the discourse and practice of fashion.

Refinery 29 has created a brilliantly cheeky flow chart mapping the predominant “sartorial patterns” for those fashionable city-walkers who might hope to be photographed by The Sartorialist’s Scott Schuman. (Click through to see the full chart.) It’s spot-on, not just in its gently teasing dissection of Schuman’s parameters for choosing stylish subjects, but also in its documentation of just those tensions I discuss here between individualization and standardization in the “daily outfit” photograph, which could be replicated I imagine for any given style blog. (The familiar critiques about the narrow strictures for the right “look” that will earn you sartorial love on lookbook.nu, for instance, could easily lend themselves to this exercise.) The chart both names the “uniform” that qualifies a person for a Sartorialist photograph (with all the implicit gender and sexual norms), but also the distinctive “detail” that stands in as a signifier for what we recognize as “a unique personal touch” — the “quirky hat,” the scarf, the “pop of color.” 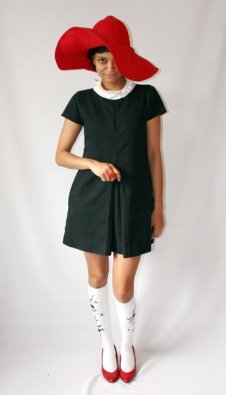 Rob Walker’s “Consumed” column in the New York Times Magazine addresses the latest experiment in sustainable fashion, Sheena Matheiken’s Uniform Project, in which she wears the same custom-made black dress (she has seven for laundering purposes) every day for a year, and models just how creatively she can accessorize this single item. Sheena herself is inspired by her own history in uniform as a schoolgirl:

I was raised and schooled in India where uniforms were a mandate in most public schools. Despite the imposed conformity, kids always found a way to bend the rules and flaunt a little personality. Boys rolled up their sleeves, wore over-sized swatches, and hiked up their pants to show off their high-tops. Girls obsessed over bangles, bindis and bad hairdos. Peaking through the sea of uniforms were the idiosyncrasies of teen style and individual flare. I now want to put the same rules to test again, only this time I’m trading in the catholic school fervor for an eBay addiction and relocating the school walls to this wonderful place called the internet.

As Walker notes, the Uniform Project is unique among other similar efforts to explore the concept of the daily uniform. Neither artist Alex Martin’s 2006 Little Brown Dress (her thoughtful notes on how she changed as she moved through the world in this one dress are here) nor sculptor and performance artist Andrea Zittel’s on-going A-Z Uniforms, which include variations on a self-designed garment worn for six months at a time, involved daily documentation for public view. I would add to his list the 2004 Gray Sweatsuit Revolution, which dared its adherents to wear a uniform of the generic grey sweatsuit in a half-humorous, semi-serious send-up of the rapid pace of the fashion cycle and its drive toward distinction.

Against these other experiments which often defined themselves as solitary contemplations “against fashion,” what is most noticeable about the Uniform Project is first, its interactive nature –readers to the daily blog often send Sheena their secondhand or handcrafted items (available on Etsy!) to wear– and second, the enormous treasure trove of accessories she’s already accumulated and photographed for this project, only on its third month (she began in May). The photographs of her daily outfits are sometimes so laden with eye-catching accessories that it takes a moment to discern the black dress –her blank canvas– beneath them. This leads Warner to conclude:

There’s an obvious tension here: what sounds at first like an exercise in neo-Puritan making-do in a time of austerity is in reality a celebration of the very thirst for inventive novelty that has defined consumer culture for years — or at least that has defined the many online fashion entities that have glommed onto the project. However you might characterize the Uniform Project, it’s definitely not antifashion. “If anything,” she says, “it’s quite the opposite.” Which is what makes it so much fun to follow along.

Style blogs focusing on the daily sartorial statements of their authors are odd creatures — creating heightened processes of deliberative self-presentation (taking and posing for good photographs is an art), sometimes purporting to instruct others in the ephemeral pursuit of style, often inviting commentary and, more rarely, critique. But the Uniform Project is fascinating inasmuch as it illuminates some of the distinct features of style blogging (especially the daily outfit photograph) as the most recent innovation on fashion’s seemingly only constant since its industrialization — that is, the ongoing tension between individualization and standardization.

(In an aside about the rise of some style blogs to the top of the heap, I think that my favorite intellectual fashion blogger –whose own obsession seems to be theorizing hipsterism and its aesthetics– Footpath Zeitgeist is onto something when she writes, “I guess for me the question right now is: ‘How do we make clothing our own?’ Too often, fashion writing answers that question through a logic I could call ‘stylism.’ Stylism is the belief that having a coherent and identifiable ‘personal style’ is the yardstick of chic…. [S]ome people are held up as possessors of an ineffable logic of creativity and bricolage that enables them to render old ideas new, either through recombination or by recontextualisation. The rest of us can learn to attain that logic ourselves through observation (especially in ‘street style’ discourse) and copying.”)

What’s most relevant here are the parameters of the most-praised photographs on the most trafficked blogs, which as an informal rule must detail where or how each item worn was bought or collected, and as an informal observation seem to include a mix of mass-produced items (Forever 21 or H&M), thrifted or vintage pieces, and in some cases, more high-end purchases. The production of a unique “style” deliberately treads on this tension between individualization and standardization, between Forever 21 layering tank tops and Chloe leather sandals and thrifted Palmetto acid-wash denim skirts, which in combination renders the wearer distinct in her styling of these items. (As someone whose closet is crammed overfull of thrifted garments –including more than one ’80s beaded-and-feathered sweater dresses– and a few pieces from a wide range of retailers, I want to note that I am hardly exempt from this magpie strategy.) The key to this bricolage, as Footpath notes, is in the detail that enables distinction. She cites Roland Barthes on the figure of the “dandy,” and the same quote is useful here:

The dandy is condemned to invent continually distinctive traits that are ever novel: sometimes he relies on wealth to distance himself from the poor, other times he wants his clothes to look worn out to distance himself from the rich – this is precisely the job of the “detail”, which is to allow the dandy to escape the masses and never to be engulfed by them; his singularity is absolute in essence, but limited in substance, as he must never fall into eccentricity, for that is an eminently copyable form.

But as Footpath notes, the detail is performed not for oneself but for an audience. She observes, “And it is in the (at least theoretical) infinity of singularity that dandies can identify each other. They are recognising each other’s thoughtful originality: the precision and subtlety of each other’s sartorial signatures. They are not identifying with the other’s stylistic similarities, but with the other’s stylistic differences.” While Footpath extends and modifies this line of thought to the phenomenon of boy hipsters to hilarious effect (comparing photographs of sullen boys in unkempt haircuts, low v-neck graphic t-shirts, and chain necklaces, taken at the same MisShapes party), and could be applied to any number of subcultural groups (I remember this attention to “sartorial signatures” when I was one of the punks), this is a useful way to begin to understand the exchange that occurs in the most popular style blogs, between the posted outfit and the comments that follow, that produce what can be understood as an informal, semi-exclusive community based on shared aesthetics and cultural capital. That is, such style blogs are exercises in self-presentation put together for the purposes of rendering transparent the not-intuitive process of becoming an expert in evaluating as well as cultivating an “individual style” under the watchful eye of hundreds, even thousands, of other stylish persons striving for the same. None of this is “bad,” of course. But for me, it does highlight the paradoxical coincidence of standardization and individualization, or the uniform and the detail, in any one outfit — a coincidence purposefully illuminated by the daily photographs on the Uniform Project.

The Uniform Project takes this exchange in another direction, in which the viewer can participate in Sheena’s quest for individuality in spite of the spirit of the uniform by sending her an accessory or item of clothing that she will recognize in response as a suitably singular detail, chosen by you as an also distinctive personality, and subsequently might wear on her daily blog for others to also admire as such. You can become a participant, as long as you are stylistically literate in her sartorial semiotics, which are specific to the magpie aesthetics and what Footpath might call a “calculated insouciance” circulating also on other style blogs. And if you are not now literate, you can become so. New technologies up the ante on numerous levels then, increasing the audience for one’s aesthetic individuality as well as the stakes for continuous self-reinvention and the sorts of exchanges that affirm, amend or even police the daily expression of a public self.