Awl writer Cord Jefferson just penned an incredibly thoughtful piece on the phenomenon of “nu prep” or what passes for “classic Americana” in men’s style. In “White People Clothing and ‘Old Money Green,'” Jefferson wonders what to make of garments whose appeal is narrated through unsubtle references to histories of racial degradation and economic privilege — Ralph Lauren Polo’s “old money green” chinos, J. Crew’s “plantation madras” button-down, and J. Peterman’s “owner’s hat” (the copy for which reads, “Some of us work on the plantation. Some of us own the plantation”).* Jefferson ends his piece:

I like Barbour jackets a lot, and Tod’s driving moccasins. I even like “Nantucket red” pants with a crisp white shirt and a blue blazer. But, as a person of color with no family crest of which to speak, I wonder if I should. It would be one thing if the current fashion trends were merely sentimental for grandpa’s favorite pair of shoes. But here, amidst the money greens and plantation nostalgia, it seems as if they’re also rooted in grandpa’s stunted cultural outlooks as well. I now see a sick irony in myself and kids in East New York wearing bow ties and sweater vests. Not new money kids, not old money kids, but no money kids who, apart from the slacks, look nothing like the Take Ivy boys everyone’s heralding, copying, designing for and listening to. To paraphrase one of my favorite poets, “I would go out tonight, but my ancestors were crushed under racial oppression for centuries.”

Referentiality –or knowing what cluster of ideas we refer to when we say “old money,” for instance– is an unstable thing. Does aestheticization deracinate a plantation history, or merely insist that such a history does not matter? For what might an “owner’s hat” be nostalgic, if nostalgia is the modern phenomenon of borrowing a “lost” sentiment or sensibility from the past for present usage? What does it mean to apprehend or be attached to something understood as lost, when the spatial or temproal dimensions of that loss cannot help but include chattel slavery or colonial racial rule? The dead do not stay down while their clothes come forward.

As black style becomes global style, does the appropriation and revision of fancy clothes produce another historical consciousness, another origin story, for these dress styles? Consider the sartorial performances of the immaculately attired Andre 3000, the calculated precision of the self-fashioning Fonzworth Bentley. We might also recall Monica Miller’s Slaves to Fashion, in which she argues black dandyism “makes both subtle and overt challenges and capitulations to authoritative aesthetics.” Miller suggests, “Dandies are not always the wealthiest, but they aspire to other things and show that existing hierarchies can be broken. It’s about making something out of nothing.”

So does the meaning of a garment emerge from consumers’ usage, or from its conditions of manufacture, both ideological and material? In response to a commentator’s smart observation that “I would pause before associating Japanese fandom of this look to a deep dream of giving off Landed Class vibes,” Jefferson clarifies:

Not to dive even deeper into the rabbit hole, but I suppose what I find problematic about the trad blogs is how whimsical they are about longing for the days of yore. It’s very easy for middle aged white guys to romanticize the 50s and 60s (http://www.acontinuouslean.com/2010/02/15/las-vegas/), because then they would have been even freer than they are now. For me to think of the ’50s is to consider times of terror, heartbreak and violence.

While these garments’ manufacture is new, some of the questions I asked earlier of vintage politics seem relevant here.

What are the vocabularies of vintage clothes and how do these vocabularies produce value for the vintage-clad self? What feelings do vintage clothes and their histories inspire, in whom? What do these feelings do — to our understanding of the past, other bodies? As I consider these and further possible queries, it would appear that vintage can be about the evaluation and preservation of an item or an ideal –a beautiful dress, a beautiful woman– against the ruin of time, or vintage can be marshaled to mark ruin as important, as a significant event in the social life of that thing or ideal.

As Jefferson points out, the evaluation and preservation of a beautiful item from another time and place might easily slide into the evaluation and preservation of an associated (terrible, no-good) ideal. Nostalgia for a particular era or its sensibility can become dangerous, especially when such a sensibility might include qualifiers such as “dignity” or “freedom,” “classiness” or “old-school glamour,” which are also shifting measures of human value. (Consider some of the nostalgic remarks about “respectability” here.) But the adaptation of these dress styles can also fashion defiance, marking the ruin of these eras in these styles’ unruly revisions by those once denied their wearing.

Perhaps we must distinguish between the meanings that self-fashioning persons assign their clothes, and the meanings that lend a bloody social life to things like an “owner’s hat.” They may overlap; they may not. I think that there’s no coming down on one side or the other here: it’s a “both”/”and more” situation.

* Okay, J. Peterman is crazy nuts. So many of the “men’s things” are accompanied by nostalgic remembrances of multiple imperial moments. The “19th-Century British Dhobi Kit” is described thusly: “The British called them ‘dhobi’ after the ‘wash boys’ that they hired by the hundreds in Burma, Madras and the Punjab. They became such a necessity that viceroys, governors-general and trade ministers had them handmade in London before heading off to postings in the far reaches of the British Empire…. The perfectly civilized way to start your day – no matter where you find yourself. Imported.”

The Lady Loves A Tramp

Have you not been reading Threadbared? (You should, because one of us is an old punk.) I just read that your menswear collection for Milan Fashion Week is inspired by tramp chic, of all things. Here a mind-boggling excerpt from your press release:

“Perhaps the oddest of heroes to emerge this season, Vivienne Westwood found inspiration in the roving vagrant whose daily get-up is a battle gear for the harsh weather conditions . . . Quilted bombers and snug hoodies also work well in keeping the vagrant warm.”

Your catwalk was covered in flattened cardboard boxes and your models carried bed rolls, their hair silvered with artificial frost from their outdoor travails. What the fuck, Vivienne? Look, I know that between your past as an art-school punk rocker and as a longtime member of the bourgeois avant-garde, it is almost required that you romanticize the poor. (Vivienne, don’t deny it. I’ve seen your past collections and attended your retrospective at the de Young last year.) But it’s been done! A lot! So not only is it not original –in recent memory, John Galliano, Erin Wasson, Ke$ha, and W Magazine did it, proving again and again Rosalind Krauss’s argument that originality is a myth of the avant-garde— it is stupid. Such runway homelessness, this tramp chic, just becomes the occasion for you and your audiences to praise your own aesthetic judgment (in this language, finding beauty in ugliness) and moral sensitivity (and in this, magnanimously granting to the indigent Other a sense of humanity through their aestheticization).

My Madras Brings All The Boys To The Yard 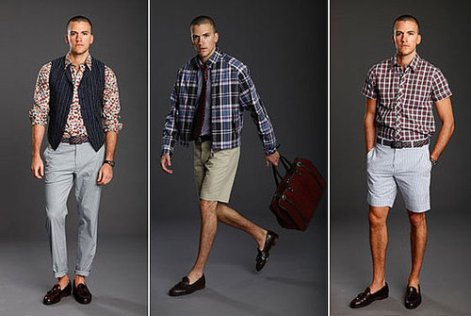 This was originally written as a response to a New York Times inquiry, but because we don’t check our e-mail everyday, we missed the writer’s deadline. The resulting article was published in this Sunday’s Style section, called “Crimson and Green.” Our thanks to the author, Michael Grynbaum, nonetheless, because without his inquiry we wouldn’t have an occasion to reference Kelis.

Harvard University’s licensing of the name “Harvard Yard” seems to be a not illogical next step for the corporatization of the university, with an increasing emphasis on branding. (Consider the licensing deal between New York University and the United Arab Emirates, and the resulting controversy about the university’s “brand dilution.”) Pairing a conservative New England aesthetic with a more modern fit, the line of menswear being manufactured and marketed under the name Harvard Yard by private label Wearwolf Group is pretty clearly nostalgic, and not in an ironic, tongue-in-cheek manner. This is not surprising, since inspiration for the line is explicitly drawn from photographs from Harvard’s archive of the 1950s and 1960s, featuring (we imagine) lantern-jawed young Protestant white men from “good families” and bearing plentiful connections to exclusive clubs of all sorts. As a story about its aesthetic, it seems quite obvious that this menswear line references an earlier historical moment in which university life and Harvard in particular stood for a privileged Ivy lifestyle, but also an exclusive American ideal.

We can’t predict who might buy these clothes, and how they might wear them, but Harvard Yard does depend on the fantasy that the purchase of a symbol will bring you in closer proximity to the status being sold. It’s a fantasy about a social status available to a very few then and, via Harvard Yard, a fantasy about accessing the signs of that status in a much more muddled moment now.

As such, the University’s announcement that the licensing windfall (an undisclosed amount) goes to the undergraduate financial aid program seems like a public relations buffer to protect against accusations of both elitism, because the clothes conjure up an exclusive history, and brand dilution, because it’s for a “good cause.” If this is the case, the menswear line as financial aid fundraiser, it fails pretty miserably. New England style devotees in argyle and penny loafers purchase, with their clothes, shiny opportunities for low-income students of color? The phenomenon of the rich attending to the elevation of their social worth, while expressing concern for those deserving “less fortunate,” weirdly mirrors a certain, condescending relation of charitable giving.

But with the decline in sales for mainstream retailers of prep style such as for Abercrombie & Fitch, and more cosmopolitan labels like A.P.C. producing clean, modern takes on seersucker and plaid, we’re not sure that Harvard Yard will be successful anyway.