Creative director for Elle magazine Joe Zee seems confused about the role of a fashion/style blogger and the role of a fashion magazine editor. In yet another barb against Tavi Gevinson, the ‘tween-age blogger wunderkind from suburban Illinois, Zee reiterates his colleague Anne Slowey’s skepticism about young bloggers’ fashion expertise: “What am I getting out of a 13-year-old’s opinion about fashion? How does that help me distill the collections? What am I supposed to be buying? That’s what an editor’s job at a magazine is.”

Um, yeah. That may be what “an editor’s job at a [commercial] magazine” is but when did telling the public what they’re “supposed to be buying” become the only legitimate mode of fashion writing?

While Slowey, Zee, and other gatekeepers want to keep the “digital natives” off their cultural-economic territory (presumably, they’re nostalgic for a time before the democratization of fashion), there is a growing discourse about the problem of the the ‘tween blogger that is worth considering seriously. By the way, notice how real and virtual territorialism always only works in one direction. Nearly all major fashion magazines now have full-time bloggers on staff. Can you imagine how ridiculous – but also wonderfully hilarious – it would be if ‘tween and twenty-something bloggers protested the print media’s convergence and capitalist takeover of digital media spaces?

In the past few months, a number of people have raised concerns about ‘tween bloggers and child labor laws. The spark, I think, was lit by the news that Gevinson had been commissioned by Harper’s Bazaar to write a column for their January 2010 issue reviewing the Spring collections. Here’s what some of them are saying:

The ethics of the industry employing young models have been discussed at tedious length, but because of the “massification” of bloggers, Tavi gets to elude these discussions because we can pretend that she’s just an “amateur,” that she’s not at work when she’s at fashion shows. Yes she is. She is being invited to these shows for economic reasons, so we’re not just talking about techno-generational issues; we’re talking about child labour. (March 5, 2010)

Having exhausted teenagers in the pursuit of fresh material to exploit to connote “youth,” the fashion industry has begun to seize upon ever younger recruits, willing victims fashionized far before their time. Bled of their individuality by the parasitic industry, these victims are left for “generic” . . . (February 16, 2010)

[P]erhaps after some formal journalism training, Tavi could probably make a decent fashion journalist. Still, the question remains: Will she be taken seriously? It’s hard to tell whether she will be greeted with open arms as the new and improved Tavi, or rejected and thrown aside like so many child actors before her. (February 10, 2010)

Each of these critics in different ways are shedding light on the underside of work flexibility that the new creative economy both desires and demands. The Internet’s reorganization of time – what Michel Laguerre calls “flexitime” – and its impact on the meanings of work/leisure, workplace/home, workday/weekend, to name just one set of traditional spatio-temporal binaries is generally celebrated as post-industrial freedom:

[T]he process by which work that used to be done at a conventional workplace can now be carried out elsewhere (locational flexibility) and at a time of their choice (temporal flexibility) . . . allow[s] employees more freedom in the organization of their working hours.

As I’ve mentioned in a previous blog post about the new digital work order and its regulatory mechanisms that induce not only multi-tasking but also omni-tasking (the idea that because one can always work, one should always be working) and which manifests for me as blogger guilt, the flexibility of work in the Digital Age particularly for those working in the creative economy is a complicated thing.

Returning to Gevinson: On the one hand, she is an exemplar of the democratization of fashion and the media that define the neoliberal present moment. Her youthful pluck, unique creative expressions, mastery of information technologies, and enterprising initiative embody the characteristics that are most valued in the creative industries of fashion and media today. Moreover, her age and gender, her location outside the traditional centers of fashion (she lives in Oak Park, Illinois), and her aptitude for multitasking as consumer and producer of fashion objects, images, and discourses confirm the neoliberal beliefs in the democratizing potential of work flexibility and related to it, the flexibility of geographic, social, and economic borders. That a 14 year-old girl (14, this month) from a Midwestern suburb has made her way into the global centers of fashion is suggestive for many people of the decentralization and thus democratization of the powerful cultural institutions of the media and fashion.

On the other hand, as the critics above point out, the numbers of hours she’s working, her integration into the adult world of fashion commerce (where she’s exposed to a host of extracurricular activities that are surely not Board of Ed approved), and yes, the level of public scrutiny she invites and does not invite should make us all seriously think about the exploitation of young bloggers by the high profit-seeking fashion and media industries. 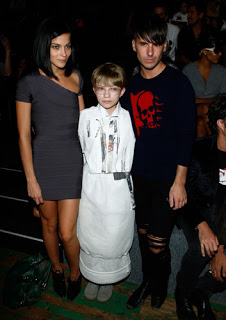 (In the above photos, Gevinson sits front row with BryanBoy at the Marc Jacobs show and hangs backstage with Leigh Lezark and Geordan Nicol of the MisShapes before the Y-3 Spring 2010 fashion show in New York City.)

Ironically, work flexibility was once the “rallying cry” of laborers who were sick of the Fordist industrial work order. As Andrew Ross writes in his latest book, Nice Work if You Can Get It: Life and Labor in Precarious Times (NYU Press):

The demand for creative, meaningful work in factories and offices was a rallying cry of the 1970s ‘revolt against work’ [movement which led to] calls to humanize the workplace by introducing mentally challenging tasks and employee innovation . . . as an alternative to the humdrum routines of standard industrial employment.

Fashion blogging exemplifies precisely the conditions of labor being fought for in the 1970s. Bloggers work in a field where creative passion and playfulness are job requirements. They typically work from home or from exotic locations like the tents at Fashion Week (in New York, Milan, Paris, Moscow, Kuala Lumpur, Johannesburg, etc.) As such, “work” often looks a lot like “play” – and as the photos of Gevinson attest – what we once considered child’s play (playing dress-up, cutting school to hang out with the cool kids, and poring over the sartorial styles of star designers and celebrities) is now potentially a culturally and economically profitable business.

It is the playfulness of the creative economy that works to gloss over the un-democratic social and labor conditions internal to the capitalist logics driving the media and fashion industries even in the age of democratization. As the critics who are concerned about the issue of child labor in the new creative economy allude, the future of the Digital Age may look a lot like the Industrial Age.

Filed under DEMOCRATIZATION OF FASHION, FASHION 2.0