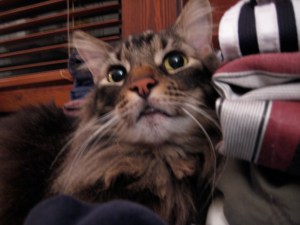 Apologies for the recent radio silence — I’m suffering a terrific head cold as well as ever-anxious anticipation for my manuscript workshop this week. Being ill has been something of a relief, quite frankly, as it feels like a legitimate reason to stop working for at least a little while. (Or to do other work, though I have my cat Morton to do my laundry for me!) I’ve actually taken a bit of a break from the Internets –except for vintage shopping on Etsy!– but here are a few things I’ve enjoyed reading in the last week or so, while Minh-Ha has been on a research trip.

Queer novelist and performer Michelle Tea is blogging for the San Francisco Museum of Modern Art now, and in her latest missive she ponders the return of possibly regrettable fashions past:

I don’t know if I am ready for creepers to make a comeback, even in the form of a boot, even if the boot comes with a leather faux-sock poking over the top, even and especially if it comes hung with a couple of decorative boot-belts. And even if they are designed by Alexander Wang. But you know, even as I type this, looking at the boots in their buttery lighting at Barneys, where they live, I am starting to have second thoughts. Maybe they are actually the greatest things I’ve ever seen. Sometimes being repulsed by a piece of fashion is a signal that I’m about to be obsessed with it.

It seems that the Internets is spitting up reflections on the impact of fashion bloggers these days (we’re no exception), especially with Style Rookie Tavi’s skyrocketing interplanetary profile as both model and muse. Imran Amed from The Business of Fashion offers this new social media reality check to industry insiders, while Evil Monito’s Lindsey Ibarra chimes in with some thoughts on the increasingly blurred divisions between insider/outsider status, as well as shifting measures of expertise, especially apparent as amateur fashion bloggers appear to replace professional stylists:

As the fashion blogosphere has grown it’s become packed with new voices, talents and faces. Through its evolution it has become clear that in order to be a valid blogger one must be a visible blogger and in turn the World Wide Web has been flooded with boys and girls eager to show themselves off to the rest of the world. No longer is it just about the clothing; suddenly it’s also about a face wearing the clothing, and yet I suppose in some ways it always has been. When supermodels ruled the world their faces were just as important (if not more so) as the clothing they were modeling but the added element of worldwide exposure at the click of a button has created an entire generation of “I’m famous on the Internet” icons.

Next, there be black dandies all over! Jezebel covers the recent release of photographer Daniele Tamagni’s Gentlemen of Bacongo, documenting the phenomenon of sapeurs, or the Congolese subculture of dandies. I’d been worrying at this postcolonial knot of politics and desires since I read a few months earlier Patty Chang’s review at Fashion Projects of George Amponsah and Cosima Spender’s documentary The Importance of Being Elegant. Chang’s comments are insightful:

Watching this documentary, it’s unavoidable to draw parallels to the image of ‘bling-bling’ culture propagated by new school hip hop. The projection of cool by emulating the conspicuous consumption of elites, and the impersonation of success and fashionability, rather than the projection of a sense of depravation are traits shared by both subcultures. Indeed, Amponsah and Spender seem more inclined to portray the phenomenon of la Sape in a similar vein to the glorification of material excess found in hip hop culture. The inherent paradoxes of poor unemployed urban youths who hustle to be able to wear designer duds or footage of Papa Wemba trying on garish fur coats by Cavalli, all seem to confirm this.

Yet, la Sape has a history that is far older than this documentary suggests. Originating in Congo-Brazzaville in the 1930s, the movement’s inspiration (though often disputed) draws reference from the archetypal dandies of modernity as well as Western films of the 1940s and 1950s, especially those of mobster, black and white thrillers, and the Three Musketeers. The sapeurs of Brazzaville were mainly composed of lower middle class young men, high school drop outs, and later, disenfranchised youths. Observing a strict three color rule, their austere elegance became a method to cope with colonialist hegemony and assimilation policies, as well as a way of subversion and resistance. In addition, the acronym la Sape plays on the French term for clothing and points to the fascination with their colonizers. The sapeurs of Brazzaville preached a conservative style that focused on cleanliness and absence from using hard drugs. Through the cultivation of clothes, they sought to define their social distinctiveness while deriving pleasure in admiring themselves, somewhat akin to what Pierre Bourdieu has called a ‘strategy of self-representation’. Fashion became a symbolic gesture of reclaiming power in times of economic deprivation and attempts at political dominance. In some instances, it proved a man could be a master of his own fate. Some authors have remarked that the sapeurs concealed their social failure through the presentation of self and the transformation of it into an apparent victory.

And finally, Fashion for Writers is on some kind of posting roll with wonderful prose and lovely photographs. I’m inspired, though not enough to get dressed in something besides yoga pants and my old Maximumrocknroll t-shirt right now. Damn this cold! I will just have to heal in the warm glow of the Kate Bush Dance Troupe!