Representations and performances of casual racism on fashion runways and fashion magazines are now so commonplace that when I see them, I feel more weary than angry. (Same goes for their accompanying lines of defense – creative freedom, cutting edge, avant-gardism, blah blah blah).

But while editorials like this one in the recent issue of Numero are no longer surprising and while I’m racing to meet multiple deadlines in an ever-growing to-do list which requires me to do a quick time-cost and benefits analysis before posting anything, I did want to share this with you. The inclusion of the baby standing in front of Constance Jablonski (in blackface) and her empty carriage ratchets up the creep factor of this ad for me. 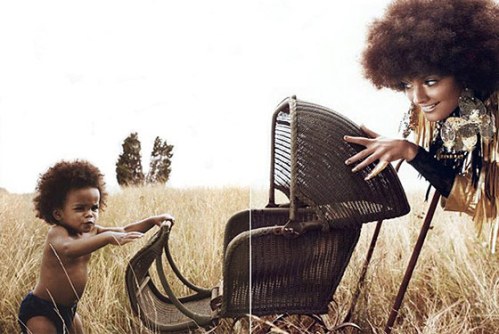 For a more thoughtful analysis of this editorial as well as additional images, see Styleite. For Threadbared commentary, see our growing number of posts dedicated to the fucked-upness and tiredness of casual racism, filed under the categories Fashioning Race and Fashioning the Human.

Here’s Jablonski without the blackface makeup: 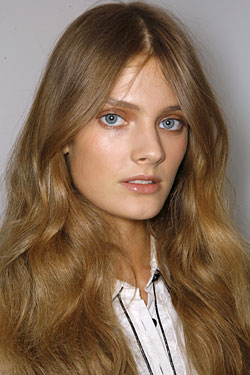 Western discourses of beauty as coextensive with humanity, morality, and security bear long and bloody histories of undergirding imperial racial classifications. It is as such that the racial Other has often been found under the sign of the ugly –which is to say, the morally reprehensible, the sexually and spiritually threatening— as the limit of the human and the enemy of beauty. Both beauty and ugliness have civilizational dimensions, dividing and valuing peoples hierarchically.

In this way, the off-campus party, dubbed the “Compton Cookout” and designed as a deliberate mockery of Black History Month at the University of California, San Diego, aptly demonstrates the terrible legacy of this politics of beauty. (If you’re not sure what this event and the resulting furor are about, please see here and here.) The Facebook invitation featured detailed instructions to party-goers on how to enact caricatures of black racial deviancy via “ghetto” dress and a performance of ugliness-as-subhumanity:

February marks a very important month in American society. No, i’m not referring to Valentines day or Presidents day. I’m talking about Black History month. As a time to celebrate and in hopes of showing respect, the Regents community cordially invites you to its very first Compton Cookout.

For girls: For those of you who are unfamiliar with ghetto chicks-Ghetto chicks usually have gold teeth, start fights and drama, and wear cheap clothes – they consider Baby Phat to be high class and expensive couture. They also have short, nappy hair, and usually wear cheap weave, usually in bad colors, such as purple or bright red. They look and act similar to Shenaynay, and speak very loudly, while rolling their neck, and waving their finger in your face. Ghetto chicks have a very limited vocabulary, and attempt to make up for it, by forming new words, such as “constipulated”, or simply cursing persistently, or using other types of vulgarities, and making noises, such as “hmmg!”, or smacking their lips, and making other angry noises, grunts, and faces. The objective is for all you lovely ladies to look, act, and essentially take on these “respectable” qualities throughout the day.

The “Compton Cookout” continues in the American theater tradition of blackface minstrelsy. As nineteenth-century free blacks used dress and clothing to distinguish themselves as also human, blackface minstrel performances subjected this self-fashioning black person to ridicule and loathing. In this, and as evidenced by the above, the defamation of black style is absolutely crucial to the racist imagination — with particular revulsion for black femininity. While the directions “for guys” offer a rote inventory of certain brands or items, the directions “for girls” drip with moralizing language sneeringly directed at an embodiment stereotyped as irrational (“cheap clothes” mistaken for “high class couture,” “cheap weaves” in “bad colors”), uncivilized (“limited vocabulary,” “cursing persistently”), and animalistic (“smacking their lips,” “making other angry, grunts, and faces”) — in other words, ugly.

The statement from UCSD’s Ethnic Studies Department explains how such mocking directions are tied to a history of minstrelsy:

This “monstrosity” (as some of the organizers called it) has a violent and racist history that began with blackface minstrel shows in the U.S., starting in the early 19th century, heightening with popularity during the Abolition Movement, and extending into 20th century theater and film. Both blackface minstrel performances and parties such as the “Compton Cookout” reinforce and magnify existing material and discursive structures of Black oppression, while denying Black people any sense of humanity, negating not only the actual lives that exist behind these caricatured performances but the structural conditions that shape Black life in the US. Far from celebrating Black history, events such as this one are marked celebrations of the play of power characteristic of whiteness in general and white minstrelsy in particular: the ability to move in and move out of a racially produced space at will; the capacity to embody a presumed deviance without actually ever becoming or being it; the privilege to revel in this raced and gendered alterity without ever having to question or encounter the systemic and epistemic violence that produces hierarchies of difference in the first place. Moreover, like their blackface minstrel predecessors, the organizers and attendees of the “Compton Cookout” demonstrate the inextricability of performances of white mastery over Black bodies from structures of patriarchy: by instructing their women ‘guests’ on how to dress (“wear cheap clothes”), behave (“start fights and drama”), and speak (“have a very limited vocabulary”), these young men not only paint a degrading and dehumanizing picture of African American women as so-called “ghetto chicks,” but offer a recipe for the objectification of all women—made permissible, once again, through the appropriation of blackness.

Because of this terrible history, the “Compton Cookout” cannot be viewed as an isolated incident. Every year there are more college campus parties that depend upon a dehumanizing politics of dress to enact racist caricatures for entertainment; for instance, the 2006 “Tacos and Tequila” Greek party at the University of Illinois saw sorority sisters in tank tops, hoop earrings,and fake pregnancies, and fraternity brothers dressed as gardeners and agricultural workers. (With regard to the ethics of performance, the statement from the Theater and Dance community is also well worth the read.)

Both dress and beauty bear the weight of much ideological management in its racial classifications of humanity, through which some persons are guaranteed the principle of human dignity and other persons are denied it. In which some are invited to “play” at blackness-as-savagery, blackness-as-degeneracy, and some Others are trapped by this image, this event and others like it foster and perform dehumanization through a frighteningly cruel, and terribly effective, politics of ugliness.

For more background and context, read or listen to this KPBS report about both institutional and “popular” racisms at UCSD, featuring our former classmate (Berkeley Ethnic Studies, represent!) and immensely fierce and formidable colleague Sara Clarke Kaplan, an assistant professor of Ethnic Studies and Critical Gender Studies at San Diego.

Filed under FASHIONING RACE, IN THE CLASSROOM