Wired for the Weekend: “Hearing Queerly” and Seeing Straight

It’s been a long time since we’ve done a “Wired for the Weekend” post but Beverly McClellan’s recent performance on The Voice is well worth posting. I couldn’t stand American Idol (e.g., the snark of the judges, the mean-spirited tone of the audition sections, the – mostly – bubble gum pop music etc.) but I’ve been enjoying The Voice because of singers like Beverly McClellan [and also Dia Frampton (Hapa!), Vicci Martinez, and Xenia Martinez (love the tone of her voice)].

McClellan’s recent performance was absolutely spectacular. Her voice, her stage presence, and even her quirky dance moves . . . loved it all. (For a way better analysis of McClellan and Martinez’s performances than I could offer, see Karen Tongson’s brilliant post “Hearing Queerly” at her Sound Studies Blog in which she asks us to take seriously “the sonic dynamism of lesbianism.”)

There are a couple of things I do have to get off my chest though. It’s too bad that Cee Lo and the homophobic Blake Shelton try to feminize and (hetero)sexualize McClellan but, of course, their normative perspectives and intentions matter not even a little bit with regard to McClellan’s performance. Since it is The Voice, maybe the judges are better off sticking to comments about the aural aspects of  the performances because they don’t seem to get the visual at all. First of all, McClellan is not wearing a skirt. She’s wearing a kilt paired with a military jacket and she looks effing amazing. I feel like she’s channeling Marc Jacobs, actually. Second, does Shelton really think that calling McClellan hot is a compliment?! He can take his “compliment” and shove it. Uh-huh.

Filed under (AD)DRESSING GENDER & SEXUALITY, WIRED FOR THE WEEKEND

Tagged as Beverly McClellan, The Voice

The Racial Construction of Preppiness 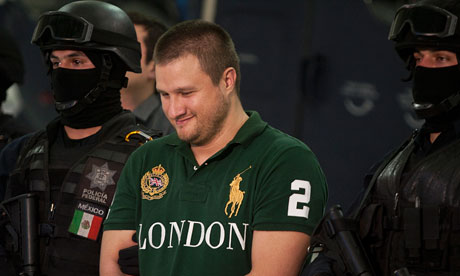 The incongruity of this “Mexican outlaw” donning the symbol of American prep leads Ditum to conclude: “sometimes, the market gets away from the marketers.”

The company has spent nearly 50 years defining and refining preppiness. Its website is full of vomtastic talk of “American style” and “inviting people to take part in our dream”; the advertising is full of clean-cut boys starring in what could be a burlesque versions of The Great Gatsby. And then it turns out that some of the biggest fans of the label aren’t gilded Wasp youths after all, but thick-set and stubbly Mexican drug dealers.

It should be noted right away that neither Ditum nor Tuckman offer statements by any representative of RLP on this matter. So their concerns for the company’s reputation and sales seem to be their own. But what is their concern?

For Ditum, it is the strange coupling of “thick-set and stubbly Mexican drug dealers” and the material symbols of “American style.” But Villareal is American, born and raised in Laredo, Texas. That this American should covet the “American style” of RLP and the aspirational social and economic values it symbolizes and secures is hardly noteworthy. Socioeconomic climbing is the promise at the heart of the American Dream. For Ditum, though,Villareal’s Americanness is not legible because his brown body is an inappropriate representative of the U.S. national body (which she describes in the racial terms of “gilded WASP”). Here, “thick-set and stubbly drug dealers” is code for “Mexican”. It is the collapsing together of his social, economic, and physical attributes that forecloses his Mexican identity for Ditum, in spite of the fact that he’s actually American (an American whose history in the U.S. predates the histories of most EuroAmericans).

Ditum’s criminalization of Mexicans is also evidenced in this alarmist statement about the harm Mexican consumers might have on the status and sales of RLP:

This is the sort of success a label would happily do without: sure, the brand is popular, but with people who’ve got no cachet to share, and worst of all, no compunction about shopping for fakes instead of the real thing – both cannibalising sales, and turning off those carefully nurtured core customers.

Again, knowing a little history helps. The Ralph Lauren Polo is itself a knock-off of Rene Lacoste’s polo shirt. Lacoste, a French (not American) 7-time Grand Slam tennis champion, wore the polo shirt for the first time in the 1926 U.S. Open championship and began mass-producing it in the 1930s—40 years before Lauren created his polo. Further, “Ralph Lauren” himself is not a gilded WASP. Born Ralph Lifshitz to Jewish immigrant parents, he anglicized his name to avoid schoolyard bullying. As he once told Oprah, “My given name has the word shit in it. When I was a kid, the other kids would make a lot of fun of me. It was a tough name. That’s why I decided to change it.” The “counterfeit” (and I use that term without any pejorative connotations) is not “foreign” to but rather embedded within the very history of American prep.

While Ditum’s assumption that Villareal is Mexican is a racist one, it’s supported by dominant discourses about the “drug war” in Mexico which tend to obscure the massive role the U.S. has played in this “war”. The U.S. government via the Merida Initiative (signed in 2007 by George W. Bush) has funneled more than $1.5 billion into this “war,” in the form of US military equipment and training. Moreover, drug trafficking is not limited within the Mexican borders. U.S. drug consumption is a multimillion dollar business—one that involves not only American drug users and dealers but also corrupt U.S. bankers and businesses (some of whom are no doubt of the “gilded WASP” set) to launder drug money. (By the way, the criminalization of drug use that enables the underground economy of drug trafficking to flourish unregulated is a social and legal policy that is opposed by the majority of Mexicans—as demonstrated by recent protests in Mexico City.)

Still, it’s curious to me that Ditum finds criminality and preppiness to be at odds with one another. What does she think the bankers responsible for the 2007 subprime crisis that brought the U.S. to its economic knees wear in their leisure time?