Friday I’m In Love (With Your Blog)

I completely love this drawing from Hark! A Vagrant, a series of historical comics by K. Beaton, in large part because my girlfriend has tried on at least three of these looks (sometimes in the space of a week). Also, historical comics! Oh, Internet, you make working on my manuscript revisions, tapping away on this computer for sixteen hours a day, slightly less painful. Here is more proof of your glory!

There’s such smart commentary going on right now about Lady Gaga and whose gender and sexual deviance gets to be understood as performance “art,” and whose is read through racial or otherwise Other-ed “truth.” Isabel The Spy observes, “lady gaga is allowed to play at being grotesque because it’s understood that she is making a choice to be grotesque; fat, non-white, or otherwise atypical bodies already belong to the realm of the grotesque. the choice is made for them. whether it’s as unfuckable (fat women, women with visible disabilities) or inherently sexualized (black and Latina women) or some weird combination of fuckable but not sexual (asian women) or just grotesque and unworthy (trans women).”

This (and the continuing debates raging across the fashion blogosphere about cultural appropriation) reminds me all over again of Minh-Ha’s citation of what Nirmal Puwar describes as “the universal empty point,” which white female bodies are able to occupy precisely because their bodies are racially unmarked: “[Thus] they can play with the assigned particularity of ethnicized dress without suffering the ‘violence of revulsion.’”

Revisiting the question of “vintage color,” Jenny at Fashion for Writers shows Beyonce some mad love. In it, she cites a post called “Retro and Race” from Gertie’s New Blog for Better Sewing and another called “Retro Styles and Gender Play” by Latoya Peterson at Racialicious. I’m just gonna add that Jenny looks smashing in high-cut playsuits! I’m sort of wondering now if I should send her my red suede leather shorts…

Tiger Beatdown’s critique of the recent New York Times Magazine profile of M.I.A. is epic: “Is it really that surprising that a performer, signed to a major label, wants attention? Is it surprising or exceptional that such a person has money? Is it surprising that a person subjected to constant scrutiny from millions of people has crafted a public face, a version of herself that she puts on when she’s being observed by strangers that is noticeably different and more suited to mass consumption than the one she wears when she’s alone, or with her husband and child, or with her best friends? And: If you were trying to get attention at all costs, if you were coming up with a fake personality that was guaranteed to garner acceptance and approval from the largest possible number of people, would ‘radical woman of color allied with militant groups’ really be the one you’d pick?” Also check this piece from Change.org called “Who Gets to Define ‘Sell Out’? MIA Meets The New York Times.” Seriously, of the two I pick MIA over the newspaper that featured Judith Miller’s parroting of the Bush administration’s claims that Iraqi WMDs threatened us all.

I’ve also been following The Seventeen Magazine Project, an experiment by Pennsylvanian high school senior Jamie Kelles to spend one month “living according to the gospel of Seventeen Magazine.” Well-written and wry, I’m enjoying her often bemused efforts to comport herself like the supposedly “normal” American teenaged girl found (or more accurately perhaps created) in this magazine. Here’s her rules: “I will read the entire June/July issue of Seventeen magazine from cover to cover. Every day I will utilize at least one ‘beauty tip’ (hair/makeup/skincare/whathaveyou) and one fashion tip. I will follow all diet and exercise tips provided in the issue to a T. I will participate in every activity recommended by the magazine (i.e. host a fright night, score your hottest summer hookup ever, be confident in a bikini, etc.) I will apply for every single ‘freebie‘ offered by the magazine, every day. I will consume all media recommended by the magazine at least once. (books/movies/music) I will hang all provided pictures/posters of ‘hot guys’ in my living environment.”

A Dedicated Follower of Fashion notes that the all-too-common fashion terms “tribal” and “ethnic” are referentially empty (“What exactly are they describing?”), while also politically overburdened.

Meanwhile, Jessica Simpson claims that filming her VH1 series The Price of Beauty felt like “missionary work.” This may seem a far-fetched and ludicrous claim, but it does follow from historical precedents set by Western women journeying into “darkest interiors” to both study and “civilize” native peoples through the documentation and reform of indigenous corporeal and sartorial practices.

Racialicious’s Latoya Peterson ponders both the myth of “hybrid vigor” and the continuing salience of colonial mappings of beauty and ugliness in her examination of the New York Times‘ article about model-scouting in Brazil. Hysteria! delves further into the uses of anthropological knowledges for such scouting missions. Furthermore, “It’s old news by now that patriarchy, racism and classism work together, but it’s rarely illustrated so clearly: racist hiring practices in the fashion industry both prevent women of color from accessing career opportunities open to white women (which could, potentially, offer a better financial situation) and make white women less likely to view their own exploitation as exploitation (after all, this is an elite field they should be grateful to even be in, right?).”

Julia at A La Garconniere has the coolest and smartest friends ever, dammit. Does she exert some sort of gravitational pull that finds her in the midst of a constellation of awesome people? (She is pals with artist Teresa Chang, maker of the zine Dykes and Their Hair, as well as the women behind American Able.) Here, Julia’s friend Iris Hodgson guest blogs on cultural appropriation and in particular style blogger Gala Darling, whose signature sign-off is “Love Letters and Feather Headdresses, Gala xx.” Good grief. Hodgson points out that, “The hipster headdress is perceived by others as being ‘fierce’ or ‘exotic’ or ‘creative’ or ‘bohemian’ at the same time that Indigenous people who might want to dress similarly would be perceived negatively for doing so.”

Meanwhile, Racialicious correspondent Andrea Plaid tackles the insidious racial politics lurking behind a teacher and principal’s expulsion of a young black girl from an advanced-placement classroom, because “her Afro was making [the teacher] sick.”

From Shake Paper, a tumblr subtitled “Smash the White Supremacist Capitalist Patriarchy,” this smart rebuttal to some of the more familiar responses to critiques of cultural appropriation:

Why, for example, are people of colour speaking English and wearing “western clothes?”, you may ask. In many cases, COLONIZED countries were forced to adopt the culture of the colonizer while their own culture was violently removed. Residential schools, for example, forced indigenous children to speak English, adopt christianity, and were forced to wear European clothes and adopt a European culture. Therefore, it is important to understand the history of colonialism and to understand that what you see as a parallel act of “cultural appropriation,” is really the product of colonialism. To equate those things is to deny the historical and continued violence produced by colonialism, and it is also a huge reflection of privilege.

Forced assimilation does not equal the appropriation and the commodification of another person’s culture. Furthermore, forced assimilation does not have to be as black and white as putting people into residential schools, but it can also be an epistemic and ideologically forced assimilation such as “business suits* = a necessary uniform to gain access into the white collar workforce,” therefore, in turn, what this also produces is the idea that the “native dress” of someone else’s culture is devalued and “uncivilized.” Therefore, in order for a person of colour to have a white collar job, they must then wear a business suit.  We have the social and cultural understanding that “business suits = employment,” but we never interrogate where that comes from and what that means.

Let me just say this,

And on that note, don’t skip out on Julia’s call for critical fashion lovers to be more deliberate and strategic: “i think we, as critical fashion lovers, need to think about and share more productive ways we can challenge oppressive systems when we see them at work, wherever we see them happening. if you have any suggestions, now is the time to share them.” Thoughts? My response, in her comments,

Great post as ever, Julia. I think one of the things we have to do you’re already doing, which is making “fashion” legible as a tangled complex of industrial-capital-state imperatives, underpinned by colonial and imperial structures as well as gender and sexual maps for making meaning, that together operate to determine not just how we as individuals wear our clothes or bodies, but that also dictate how we as social beings are assigned degrees and tiers of value and humanness via our clothes or bodies. The cultural appropriation debates are a perfect example of how these macropolitics are brought to bear upon the micropolitics of a hipster in a headdress. This is hard, hard work, as you know. 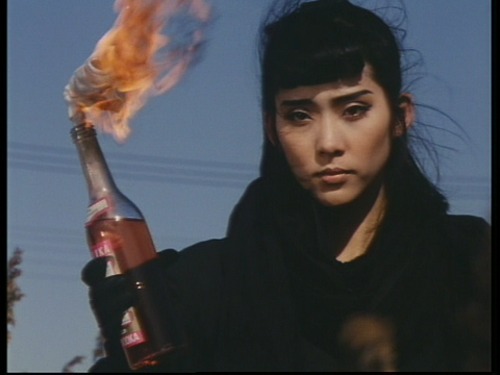 A black-clad Asian woman and "critical fashion lover" prepares her Molotov cocktail for the fashion-industrial-state complex.

7 responses to “Friday I’m In Love (With Your Blog)”