THE MEDIUM IS THE MESSAGE: Lisa Ann Auerbach’s (and Jimmy Carter’s) Sweater Advocacy

I meant to make a note of Los Angeles-based conceptual artist Lisa Anne Auerbach some time ago, but our recent “conversation” about t-shirts as a democratic garment for political messaging reminded me that I’d seen a number of her amazing sweaters at the Independent, an art fair held in the former X Initiative and former Dia Center for the Arts space during New York’s Arts Week this last March. While the sweater pictured above has no overt political message (it does remind me powerfully of tenth grade, and my friend and classmate Jennifer Lafferty transcribing these same lyrics on the chalkboard during a moment of unsupervised chaos), some of her other works do include anti-war statements (seen below), as well as Obama 2008 campaign slogans.

In Fiberarts Magazine, art critic Shana Nys Dambrot describes her work thusly: “She has recast knitting from its traditional role as a nostalgic or otherwise personally historic language to an idiomatic armature on which to pin sociopolitical commentary. It’s fine art about radicalized women’s work, belonging to a traditional of art making that is rooted much more firmly in conceptual art than traditional garment or textile craft and trade.”

I’ve also flipped through Auerbach’s book Charted Patterns for Sweaters That Talk Back, and while her work is not quite in my field of inquiry and I don’t knit, I do find fascinating the political fallout after a particular cardigan hit the national stage, described in the book’s introduction to the sweater as a political platform:

On February 2, 1977, the newly-inaugurated president appeared on television clad in that sweater, and asked us all to take a simple step to save energy: turn down the thermostat, and put on a sweater.

I’m too young to recall the aftermath of this televised moment, but this TIME editorial published soon after Carter’s first “fireside chat” seemed to find his symbolic act successful:

During his fireside chat last week, Carter introduced what may prove to be the most memorable symbol of an Administration that promises to make steady use of symbolism—the beige wool cardigan, a favorite of his. Carter wore the sweater at dinner with Rosalynn, Amy, Sons Chip and Jeff and their wives. In the library after his meal, Carter asked TV Adviser Barry Jagoda and Adman Jerry Rafshoon what they thought of the cardigan. They told him to check it himself on the TV monitor. All agreed it looked fine. Then Carter rehearsed his talk before the TelePrompTer (which was also used during the speech). “Y’all give me any suggestions you might have,” he told his advisers. Just the ending needed another run-through.

In his 23-minute talk, Carter candidly but gently served up some bad news for the nation on the “permanent” energy shortage, firmly prodded the American people to help him and defended his economic program as “the best-balanced possible.”

Conservatives lambasted Carter at the time for being a “weak” President, a thinker (heavens forbid!) rather than a “do-er,” and the sweater to them served as a risble object of scorn and as evidence that Carter was not Commander-in-Chief-y enough to “fix” the energy crisis through more martial means. But “Jimmy Carter’s sweater” has long passed into the commonsense of conservation measures, even reemerging a quarter century later in a Republican Oval Office:

Congressional Republicans will spend their July 4 recess in a renewed push to sell their constituents on the White House’s production-heavy, red-tape-slashing energy plan. And if some of them are sweating a little more than usual, remember that Thursday they got the ultimate measure of the political climate in Washington for the GOP on energy: George W. Bush sent them off in a sweater.

And of course, “blood for oil” has been absolutely devastating. Auerbach’s series of sweaters commemorating the American dead and wounded in Iraq are strangely moving. Each one marking the long years since the start of the US occupation like pages in a calendar, these sweaters suggest also the destruction of some other people’s sense of homeliness: their families torn apart, their houses foreclosed in others’ absence, their loved ones dead or damaged. With these sweaters and all the resonance of the “domestic” they invoke (the “domestic,” for instance, as the imaginary realm of the good and the true that must be protected with state violence against foreign or alien Others), we are made acutely aware that the personal is always political. 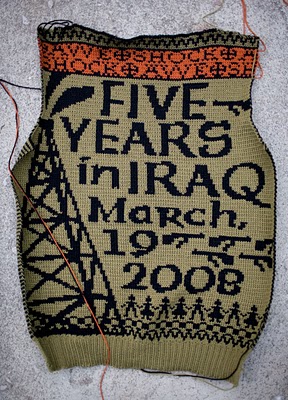 stealthissweater.com is Auerbach‘s knitted-art website, which hasn’t been updated in some time, but you can also visit her at The Little Red Blog of Revolutionary Knitting or at her artist’s site, where other projects can be found. If you’re interested in more conceptual or political knitting projects, Threadbanger has a brief essay about “knitting for what you believe in.”

Filed under THE MEDIUM IS THE MESSAGE