The Value of Fashion Work 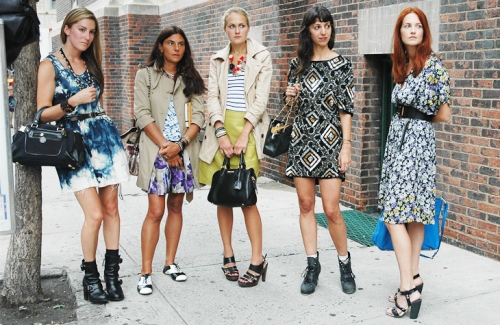 This is just a (relatively) short addendum to yesterday’s post about the labor issues involved with child bloggers. Lauren Sherman at Fashionista.com has written a provocative essay about the cost and benefits of unpaid internships for the fashion industry as well as those aspiring to break into the industry. These internships generally aren’t for blogging (because you don’t need to be hired by anyone to blog about fashion) or any other specific role but are purposely broad in scope so that interns can fill many different needs. And, as Sherman argues, the fashion industry needs unpaid interns “to make things happen.” Also, she writes that while interns may not be getting a paycheck, they get something just as (or more?) valuable in return – mentorship, experience, and future employment:

I know that, during my time in college, I did four internships, one of which I was paid a commission on sales that I closed. (It was at a boutique/art gallery.) However, the other three internships, which were in editorial, were unpaid. One landed me my first job out of college. Britt’s senior year internship also resulted in a job right out of school.

Also, it is not uncommon for college students to get course credits for interning. But as many of my students who had internships at W magazine, Harper’s Bazaar, and LogoTV can attest (if you’re reading, please share your thoughts!) – the number of course credits often didn’t reflect the kinds of hours they were logging. And according to the National Association of College and Employers, in 2008 83% of graduating students have held internships – compare that to 9% in 1992.

Unpaid internships in New York and other states in any company in any commercial field may be a thing of the past though. Nancy J. Leppink, acting director of the Department of Labor’s wage and hour division is working hard to end this practice.

While garment workers aren’t mentioned in either of these articles, I can’t help but think that the social, cultural, and economic capital of even unpaid interns in the US is far greater than the economic capital of those laboring in the CMT (cut, make, trim) sectors of garment manufacturing that is really where the things (e.g., the material objects) of fashion things happen. In bringing up the severe undervaluation of garment work and garment workers, I don’t mean to minimize the legitimacy of the Labor Department’s concerns for unpaid American interns at all but rather to add to the conversation.

Today, after the deregulation of trade in the mid-1990s, the majority of garment work happens outside of the US in places where labor is both plenty and cheap. Some numbers to consider – according to the Global Apparel Manufacturing Labour Cost Update in 2008, Indian garment industry workers get the highest wage at $0.51 cents (US) per hour. The hourly wage is $0.44 in Indonesia, $0.43 in Sri Lanka, $0.38 in Viet Nam, $0.37 in Pakistan and $0.33 in Cambodia. The egregious economic disparity between garment workers and apparel companies, the Global South and the Global North, and the sweated mass of predominantly female racial labor and the singular American celebrity/icon that represents and profits from the products of sweated labor is by now well known. Just as one example, recall that Michael Jordan was paid more than $20 million for endorsing Nike’s running shoes (in the 1990s) – this was more than Nike’s entire 30,000 person Indonesian work force was paid for making the shoes.

We should remember, too, that the numbers reported by the Global Apparel Manufacturing Labour Cost Update don’t take into account the number of hours, days, weeks, and months in which workers aren’t paid or the health, human rights, and labor violations that are the common conditions in which garment workers labor.

Filed under LABOR AND THE CREATIVE ECONOMY, LINKAGE

6 responses to “The Value of Fashion Work”