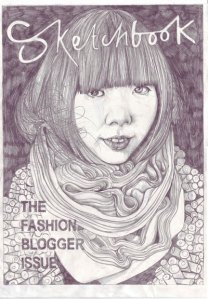 Recently launched Sketchbook Magazine opened big with the thematically timely “Fashion Blogger” issue, featuring none other than Susie Bubble as lushly illustrated cover girl. A London-based quarterly addressed to “established and emerging creative talents in fashion, design and culture with a focus on features, photography and illustration,” Sketchbook is a welcome addition to fashion’s publishing world.

So of course, it was wonderful to be interviewed by Sketchbook for their blog! Check it out here. We sound like big nerds! 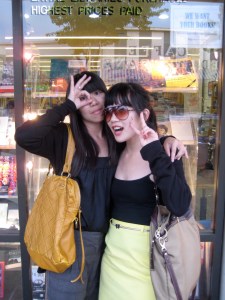 Threadbared is an evolving collaboration between two clotheshorse academics to discuss the politics, aesthetics, histories, theories, cultures and subcultures that go by the names “fashion” and “beauty.” With commentary on how clothes matter, as well as book and exhibit reviews and interviews with scholars and artists, Threadbared considers the critical importance of taking clothes –and the bodies that design, manufacture, disseminate, and wear them– seriously as an entry point into dialogue about the world around us.

We welcome queries relating to public comments, invited talks, commissioned essays, and books, films, and videos for review on threadbared! Please email us at threadbared dot 75 at gmail dot com.

Commenting on everything from blackface fashion editorials to the politics of hijab, Threadbared has appeared on a wide range of other new media from Salon, Racialicious, Jezebel, Muslimah Media Watch, Sociological Images and Women’s News Network to fashion-focused outlets like No Good for Me, Style Sample and Sketchbook magazines. Here’s some of the nice things that have been said about us:

“stylish brainiacs” No Good For Me

“Academics and fashion seem as far apart as Rush Limbaugh and the NFL (sports-reference to prove my manliness), but this blog makes it work.” The Sunday Best

“…a great fashion blog run by two ‘clotheshorse academics,’ Minh-ha Pham and Mimi Thi Nguyen (one of the smartest people I know). It’s a great mix of exuberance and analysis that takes seriously the larger, oft-ignored forces that always mediate our sense of ‘style,’ whether we care to acknowledge them or not.” Hua Hsu, The Atlantic

Even scientists love us! “Threadbared is a blog by two junior faculty ladies with teaching and research interests in the politics of fashion and beauty. They are pretty much spot-on about everything, particularly representations of race and class.” Atoms Arranged

“Also! Threadbared blog is BANANAS AWESOME. This blog is equally #1 on our fiancé/es list, because we are totally pomo like that.” The Rejectionist

Mimi Thi Nguyen, based outside of Chicago, scours thrift and vintage stores with reckless abandon. Nguyen situates her work within transnational feminist cultural studies, with an emphasis on neoliberalism and humanitarianism, war and empire. A former zinester, Punk Planet columnist and Maximumrocknroll shitworker, she has also published on punk and queer subcultures and is co-editor (with Thuy Linh Nguyen Tu) of Alien Encounters: Popular Culture in Asian America (Duke University Press, 2007).

Minh-Ha T. Pham, based in New York City and San Francisco, shops sample sales with a keen and discerning eye. She writes about the ways in which national publics and polities are organized around traditional and new media that are increasingly shaped and limited by neoliberal discourses and policies. Focusing on the fashion media and the Vietnamese American media, both her projects are concerned with the complex and contradictory relations of communication technologies, consumerism, and capitalism. Pham also writes and speaks at academic and popular forums across the country. Below are some of the topics she addresses:

GET TO KNOW US
Here is a rundown of our favorite, and probably most representative, posts thus far:

+ PICTURING POLITICS: On “Pride In His Work”
+ Blackface, and the Violence of Revulsion
+ ART: Sneakers and Borders
+ TEACHING: Brief Notes on the Unreliable Stories Clothes Tell
+ Tramp Chic and the Photograph
+ My Madras Brings All the Boys to the Yard
+ Mind over Malls, or Does Academia Hate Fashion?
+ STYLE ICON: Billie Jean (From the Archives)
+ You Say You Want a Revolution (In a Loose Headscarf)
+ History and the Harem Pant
+ Background Color
+ Policing Fashion in New York
+ Black is the New Black
+ The Truth of Lagerfeld’s Idea of China
+ Shopping with Threadbared: A Conversation
+ Why I feel guilty when I don’t blog

Unfortunately, our day jobs are such that we can’t spare the time or presence of mind to either monitor or respond to comments. Frankly, we probably shouldn’t expend this much energy on-line in the first place!

Filed under OUR JUNK DRAWER