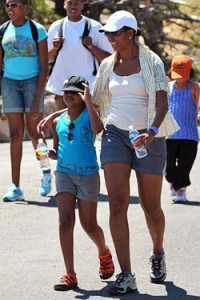 The sartorial discourse around the Obamas continues to illuminate the treacherous claims shaping and disciplining “American” civic bodies. Over at the National Review, former US assistant attorney general Andy McCarthy disingenuously wonders, “I’ve noticed that President Obama frequently forgoes the necktie — lately, even in public appearances. That reminded me — I have no idea why — that the Iranian regime has shunned the necktie ever since Khomeini pronounced it a symbol of Western decadence.” McCarthy’s gee-golly “I have no idea why,” prefacing the interpretative gap that follows hard on its heels, insidiously feigns an intuitive corollary between Obama’s occasional tielessness with Khomeini’s condemnation of this infernal men’s accessory. This bundle of logical fallacies is all too familiar in contemporary conservative political language, as further evidenced by the outrageous effort to paint Obama as Hitler’s monstrous reincarnation. In parody, a Gawker commentator snarked, “I’ve noticed that President Obama has two legs. That reminded me – I have no idea why – that Voldemort also acquired two legs when he became re-born in the cemetery through evil Satan-magic while murdering people.”

Then there is the handwringing over Michelle Obama’s decision to wear a pair of perfectly boring shorts and, significantly, bare her legs, which made the news rounds as a potentially shocking deviation from propriety (MSNBC.com insists, “First Lady’s fashions pushing the envelope?”). Propriety is, of course, a disciplinary discourse that necessarily indexes a slew of racial fantasies and sexual anxieties about representative –i.e., quintessentially “American”– bodies. We’ve witnessed this anxious convergence before in the controversy about Michelle Obama’s bared arms (although copious photographic evidence of the blue-blooded Jacqueline Kennedy in sleeveless sheathes demonstrates that bared arms are nothing new for a First Lady). Not all sartorial sniffing at Michelle Obama’s wardrobe is necessarily racist, of course. But such small controversies as bared arms or legs do transpire in a nation long-troubled by racial regimes that, in closely scrutinizing feminine black bodies, ascribed to them at worst an uncontrollable carnality, and at best an under-civilized corporeality. Thankfully, Michelle Obama’s bared arms, a.k.a. Thunder and Lightening, a.k.a. the First Guns, have their own blog in which together they ponder the media obsession with themselves. And over at the Kitchen Table, black feminist academics Melissa Harris-Lacewell and Yolanda Pierce also question the not-so-hidden undercurrent of racial fantasy and sexual anxiety that drove the initial discussion about the First Lady’s fitness.

Meanwhile, Robin Givhan considers the sartorial sensibilities of the townhall shouters as they wage war against health care and the civic obligation to care for the poor or the ailing –surely a socialist Trojan Horse!– and against Barack Obama, the black Muslim foreign communist Nazi infiltrator they fear will bring an resolute end to the white America they know and love so well. (That these two goals are brought together as one and the same is made explicit in many of the posters and protests.) For Givhan, this sartorial spectacle is about authority — the challenge to it by those in the costume of the “Average Guy –or Gal” (“a lot of them look as though they could be attending a sporting event”), and the reiteration of it by those politicians at the receiving end of their vitriol, be-suitted in “full Washington regalia.” Or, as Givhan argues:

The underlying focus of this grudge match is, of course, about power — as concentrated in Congress, the presidency, the special interests, the wealthy. The rage emerges from a feeling of helplessness that some version of reform is going to occur whether these citizens like it or not.

While surely this sartorial dynamic of a “grassroots” movement called forth to challenge unfair government matches the portrait the protesters hope to convey, I’m not convinced that this spectacle as such can be understood apart from its volatile racial dynamics. On the one hand, it seems the “Average Guy –or Gal” as a proxy civic body necessarily implicates what George Lipsitz might call a possessive investment in whiteness, especially in his or her sartorial choices that conjure, as they do for Givhan, the “real America.” On the other hand, the somber-suited politician as another sort of proxy civic body is undermined in his whiteness by proximity to the black Muslim foreign communist Nazi infiltrator. In this racial logic, the suit bespeaks the politician’s demoted status as middle management, an Obama lackey. As such, the politician is duly stripped of his authority to represent the interests of “real America” which, in the racist imaginary, most certainly would not include the black and brown disadvantaged. As Tavia Nyong’o observes, “The spectre of ‘death panels’ is, in a way, as old as post-Civil War hysteria about freed slaves gaining political supremacy and riding roughshod over the master race.” Thus, when Givhan ends her piece, we should be clear about just who the hated “boss” is, and why.

Washington’s power brokers have suited up to underscore their authority and the seriousness of the subject matter. And bully for them. But their attire also says: I am the boss of you. All those howling citizens — in their T-shirts and ball caps and baggy shorts — are saying: No, you’re not.

(Thanks to Fashion for Writers’s Meggy Wang for bringing this article to my attention!)

In a couple of much briefer notes, Shabana Mir tackles the latest in sartorial Islamophobia — the “burqini ban” controversy. “A swimming pool in the Paris suburb of Emerainville has refused entry to a young Muslim woman wearing a burqini,” and as Mir points out, this most recent ban is about a higher order of hygiene: “But the burqini is dangerous. It is a germ. It might spread. It is a visual sign of the disease – Islam – that right-wingers wish to eliminate from the body politic. It is not an accepted form of minority religion that keeps its head down and tries to look nonchalant. It is a little too loud-mouthed in its visual message. How, then, may it be tolerated in public spaces?” 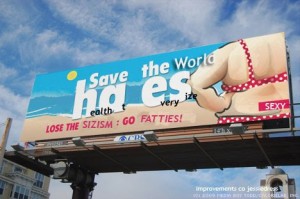