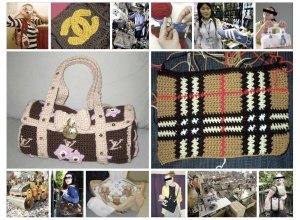 This is a short documentary on the “Counterfeit Crochet Project” that San Francisco artist Stephanie Syjuco started back in 2006. By Syjuco’s own account, the idea for “hand-counterfeiting designer handbags (Fendi, Gucci, Chanel, Prada, etc.) . . . is to insert strange variants into the stream of commerce and consumption.” Through the internet, she enlisted collaborators (or perhaps co-conspirators is a better word) to “translate” recognizable designer handbags into homespun craftworks that truly democratize fashion.

The documentary is from the Yerba Buena Center for the Arts exhibition she did called “Counterfeit Crochet Project (Critique of a Political Economy)” in 2008.

(For some reason, it won’t upload to the blog but click here to link to it.)