Frenchness, to the Exclusion of the Burqa 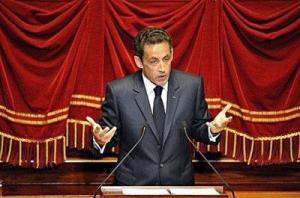 “Sarkozy’s whole thing has been to capture votes from the National Front, the far-right French party,” Scott says. “Anti-immigrant politics is a huge part of that. Sarkozy has taken this position all along that he is the champion of Frenchness. It plays well politically for him to find issues where he can declare himself the protector of French national identity.”

From Michelle Goldberg, “Burqa Politics in France,” from American Prospect, on French President Nicolas Sarkozy’s statements to Parliament about a potential ban on the burqa

Other statistics might also help us understand why Sarkozy’s words about Muslim women in burqas might be about something other than Muslim women’s best interest. For example, although in France only 12% of the population is Muslim (due largely to migration from Muslim majority countries formerly colonized by France) 60-70% of those in prison are Muslim.

So now we have a bigger picture: Muslims as a “misbehaving” minority group, an ongoing war on terror and related distaste for all things Muslim, wide-spread discrimination against Muslims (1 in 3 Muslims in Europe have reported discrimination), desire to maintain a culturally homogeneous society, and, finally, a fascination with another man’s progress. Put together, the something else is revealed: by highlighting the oppression of Muslim women Sarkozy is giving people in France more reasons to do what France is already doing pretty well-marginalizing its large Muslim minority.